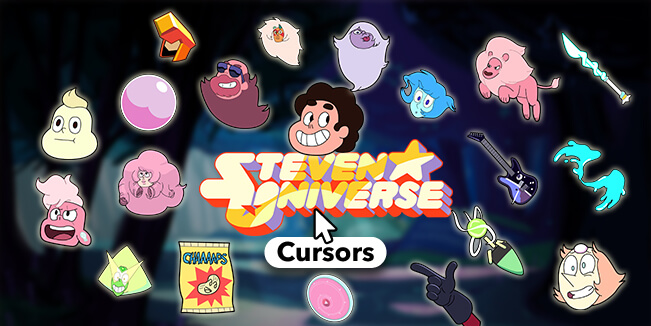 Incredible adventure stories of unusual heroes will not make you bored!  Set out to save the world with Steven, Garnet, Amethyst and Pearl in the steven universe cursors collection.  Your gems will glow with joy!

We were inspired to create the Steven Universe cursors collection by the story of an unusual boy Steven, who is trying to uncover the secret of using his own powers to help his friends save the Earth.  The interaction of the main characters, their personal disclosure and improvement looks exciting in the steven universe cursor pointer collection.

Steven Universe is the titular protagonist, and the only semi-precious in nature since.  He has a bunch of different abilities, loves his friends very much and always helps them on missions.  Gem weapons are typically physical weapons summoned from a Gems’ gemstone. Each weapon is highly personalized and unique, specially designed with the gem’s tastes and personality in mind, summoning it to the point where it ceases to be a weapon at all: Rose Quartz and Steven’s loving protective nature is reflected in their shield.  Only Steven can create such an indestructible bubble to protect himself, and even control its shape.  Use Steven Universe Bubble Shield in the best mouse cursors.

Garnet is the de facto leader of the Crystal Gems.  Garnet usually dual-wields weapons on both hands and they are the only weapons to regenerate with different designs. Enjoy Steven Universe Garnet Gauntlet in custom cursor.

Amethyst is the youngest member of the group.  Terribly reckless and frivolous.  She is armed with a triple whip with lead balls at the ends and masterfully owns it.  Adopt it in Steven Universe Amethyst Spiked Flail mouse cursor.

Greg Universe is a rock musician and a great singer with a cool guitar.  He lives in a van, periodically getting out to his son, whom he madly loves.  Explore Steven Universe Greg Universe Guitar custom cursors.

Lars Barriga, is a former resident of Beach City. His sour attitude, hostility, and selfishness paint him as an annoying and frustrating character. Explore Lars’ revival and gem-like magical abilities in cartoon cursor.

Lion is an enigmatic creature whose sentience and sapience is somewhat questionable. When Lion uses his magical abilities, his eyes and mane emit a white glow. Find it in Steven Universe Lion mouse cursor.

Steven Universe is an American animated series set in and around the fictional town of Coastal Region on the east coast of the United States.  The team calling themselves the Crystal Gems protects the world from various threats.  It consists of three aliens (Garnet, Amethyst and Pearl) and the boy Stephen.

Uncovering the secret of using your own powers and completing the mission is much easier with the steven universe cursor collection!