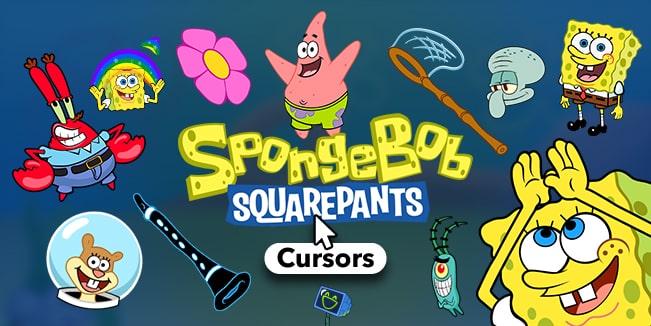 Countless quotes, scenes, characters, internet memes, viral videos. You can’t seem to log onto social media without coming across some SpongeBob memes. What else can testify to the wild popularity of SpongeBob SquarePants?

SpongeBob SquarePants follows the adventures of the title character and his friends and enemies in the underwater city of Bikini Bottom. Thanks to fans of SpongeBob, Mr. Krabs, Patrick, Squidward, Sandy and Plankton, SpongeBob Squarepants became available in SpongeBob cursors collection! SpongeBob cursor maniaconquers with its endless kindness, optimism, fearlessness and lack of negative emotions!

The main character poses with straightened arms and a rainbow glowing from one hand to the other in SpongeBob Imagination Meme cool cursor.

Gary was adopted by SpongeBob. He is a domesticated house pet with similar mannerisms to a cat. Adopt SpongeBob SquarePants’s pet sea snail and the most seen pet in the series in SpongeBob memes.

Jellyfish first appear in the episode “Tea at the Treedome”. The hunting and catching of jellyfish, known as jellyfishing, is a popular hobby among sea folk, most notably SpongeBob and Patrick. Enjoy SpongeBob Jellyfish meme cursor.

Karen Plankton is a waterproof supercomputer who lives in the Chum Bucket laboratory. She is Plankton’s wife and sidekick who supplies him with evil plans to steal the Krabby Patty formula. Explore it in SpongeBob Karen Plankton meme cursor.

Created by Stephen Hillenburg, SpongeBob SquarePants made its debut on Nickelodeon in 1999 and has only grown stronger ever since. The show has become the most successful Nicktoon as well as one of the longest-running American animated series.

The protagonist introduced a new fashion: even celebrities wear clothes with the image of SpongeBob and his stylish square pants today. The list of SpongeBob’s achievements is endless.

Outwardly, it looks like a kitchen sponge. His main attributes are big blue eyes, a kind and charming smile, freckles, dimples on the cheeks and … square pants, thanks to which SpongeBob got his last name. His hobbies are catching jellyfish, doing karate, blowing bubbles. The protagonist manages to combine everything. He works hard as a cook in the Krusty Krabs restaurant and has received the title of employee of the month more than once. There are always a lot of jokes and tricks to rest, where SpongeBob is.

Want to visit the underwater city of Bikini Bottom, home to SpongeBob? It has its own beach, airport, amusement park and much more. Enjoy SpongeBob meme cursors collection!