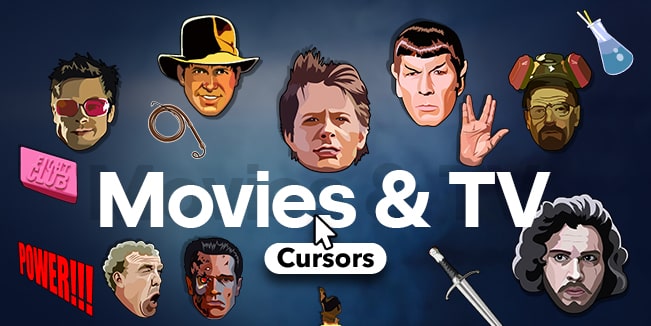 Cinema stands are full of posters. New films are released every week, and today there is such a variety of them that everyone will find something to their liking.

For the creation of Movies & TV custom cursors, we saw the emotional approach of the viewer in his desire to watch a movie. We have put together a collection of cursors from films that have made a lasting impression on viewers and influenced world cinema. They are quoted, imitated, and every director secretly dreams of being the author of such works!

Each hero of the film has its own attribute, that is, a distinctive detail of the image. For example, a whip made of calfskin became one of the features of the image of Indiana Jones, played by actor Harrison Ford in “Raiders of the Lost Ark”. Along with the recognizable felt hat, notepad, and leather jacket, the whip has become a must-have tool for the protagonist’s adventures. Attribute of the main character of the cult film “Indiana Jones” in how to change cursor.

The Vulcan fireworks were invented and popularized by Leonard Nimoy, who portrayed the semi-volcanic Spock in the original Star Trek television series. Live Long and Prosper is a welcome or consent gesture in Star Trek Spock Vulcan Salute Hand custom cursor.

Terminator Like Hand in mouse hand cursor was inspired by the idea of actual robotic limbs to replace limbs that people lost in accidents, war, and so forth. It shows that we’re probably not that far of creating robotic replacement limbs in the “The Terminator” movie cursor.

Filmmakers work with very voluminous cultural material, rework it and present it to the viewer. And the viewer, on the one hand, watches the action, on the other hand, he learns the cultural values ​​that are close and familiar to him.

Сarefully constructed scenery shows that a realistic immersion into an unknown and wonderful world is possible while watching your favorite films and TV shows. You can wear your beloved characters not only on T-shirts. Adopt Movies&TV mouse cursor collection!

Cursor pack pirates of the caribbean

Cursor pack lord of the rings