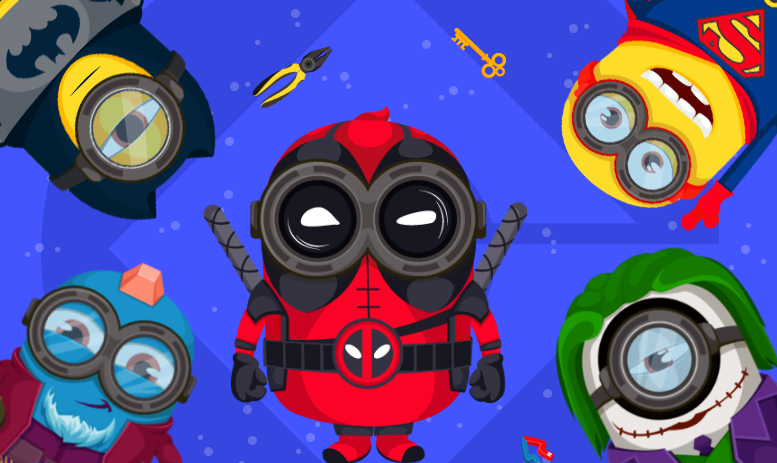 The Minions are small, short, funny yellow creatures from the cartoon "Ugly Me. The cartoons claim that these cute creatures have been around since the beginning of life on earth! And now you can find them in our Minions custom cursors collection for Chrome in a cute design! Just as cute, speaking their own language, which is an indecipherable mixture, dressed in their recognizable blue denim work overalls and goggles, with their overwhelming passion for fruit, especially bananas in our custom cursors collection for Chrome. Minions have been around since time immemorial, evolving from yellow unicellular organisms into creatures that exist only to serve the evilest masters of history. In our custom cursors collection, the evolution of Minions did not stop and they moved to the bright side turning into various superheroes from comic books and characters from movies, so everyone can change the mouse cursor to his taste and mood!

A legendary pirate of the Seven Seas, as well as a famous adventurer of the Caribbean Sea in our Minions custom cursors collection for Chrome. The custom cursor for mouse and pointer from our Minions collection will allow you to navigate the tab at the speed of a Minion Captain Jack Sparrow.

Shrek is a famous character in the series of films and games of the same name, this is a huge green ogre that lives in a swamp. Minion Shrek skin is designed for the eponymous game and is now presented as a custom cursor with Minions for our cursors collection for mouse and pointer.

A mutant turtle who fights evil on the streets of New York by learning the art of ninjutsu with his three brothers from Master Splinter. Minion Ninja Turtle as a custom cursor for Chrome. Now you can get a Minions cursor with Minion Ninja Turtle for your browser.

Kevin is a tall, two-eyed minion with short-cropped hair and usually dressed in his golf clothes, who likes to mock and tease people or minions. He is a master of golf, polo, and cricket. Kevin the Minion custom cursor for mouse and pointer with the adjustable wrench in a Minions collection of custom cursors.

Bob is a minion who is more cute, childish, and immature than most other minions. He loves bedtime stories and playing with his favorite teddy bear, Tim. Cute custom cursor with Minion Bob includes a mouse cursor in the shape of a wrench and a hover pointer with Minion Bob. The Minions custom cursors collection for Chrome will be the best suite for all fans.