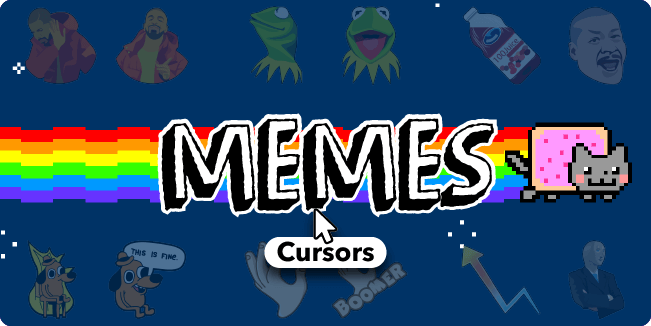 Humor is exactly the straw that we hold on so diligently. We often joke when everything is on fire. Use funny cursors memes instead of a thousand words!
We understand how important it is for people to express their feelings. This inspired us to create a meme cursor collection. Now it is much easier to express joy, regret, surprise, lack of understanding of what is happening, indifference to everything and so on.
For example, the comic with Drake presented in the memes mouse cursor collection consists of two pictures. The first shows a frame with a rapper and his refusal gesture. The second picture shows a smiling Drake wearing the same orange jacket. Typically, these two things or two phenomena are related. Two new memes or simply described situations in Drakeposting Meme custom cursor.
Meme with a puzzled cat in Woman Yelling At A Cat Meme cursor pack in a broad sense can be used as a reaction to something strange, incomprehensible. In conjunction with a meme about women, this format illustrates unfounded accusations.
This Is Fine Meme funny cursor is used in situations where someone is trying to find positive sides in what is happening. Even if something very terrible and irreparable happens.
What about a cat with the body of a cherry Pop-Tart flying through outer space? The surreal humor behind this image has captivated us, spawning nyan cat cursor. You can find a real fun in pikachu cursor, as a reaction image where a set-up leads to a predictable outcome that nevertheless leaves one surprised.
Memes have long been an industry. They are known and remembered many years later, they are always relevant. Reddit users or social media posts generate dozens of new memes a day.
Memes originated long before the era of popular pictures. A meme is any “viral idea”. Before the advent of the Internet, memes were passed by word of mouth; jokes can be considered proto-memes. Then the media began to broadcast them, and now they have crystallized into a thematic picture and a signature that can be changed.
A meme can be sad, it can be scientific, it can be a fake, but at the same time, you definitely want to tell everyone you know about it, and even add something on your own so that others will be more imbued with it.
Fun cursors are sarcastic in nature. This is a really hype topic!

Cursor pack shut up and take my money

Cursor pack think about it

Cursor pack deal with it dog

Cursor pack cat at the table

Cursor pack the seagull is laughing

Cursor pack this is fine